This week Lange and Nathan chat about our recent tournament experience at Onslaught, the newly leaked images of High Elves for Fantasy, and the trials and tribulations of playing Dead Space 3. Our listener poll examines how players view Forge World and our model of the week stands out as being a point of contention between players. Listen and Enjoy!

One week after the 6th edition Tau book has been released, there’s still a frenzy of analysis and speculation about how the future looks for this fledgling empire. I joined Lange and Matt for episode 123 of Jaded Gamercast on list 6th edition Tau list building, and doing the show is always fun. Drinking and getting belligerent is fine, but doing so with an audience is even better! 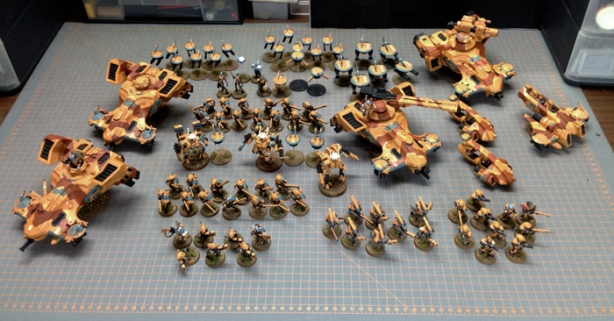 Seb’s Tau Cadre, pic from his post on the Advanced Tau Tactica forum.

We didn’t talk about everything in the list, but we tried to get through a few notes on how to set up the core of an army, and what roles certain units can fill within that framework. Here’s a slightly less entertaining but hopefully somewhat informative breakdown of the codex units and what they will do for the army.

Commander – Force multiplier via support systems and/or BS5 gunboat; can tank wounds if upgraded with Iridium Armor for +1T and 2+ save; potential skyfire/interceptor

Ethereal – Cheap; leadership support and minor aura type buffs; worth an extra VP if killed so keep him safe

Kroot – Quite cheap and have decent mid-range firepower; harassment via infiltrate/outflank; worse than ever as a combat unit

Pathfinder Team – Cheap markerlights will make them a staple in any list; far more firepower than before; no mandatory Devilfish; cheap and quite nice new models

Sun Shark Bomber – Arguably a better interceptor than the Razorshark thanks to Missile Pods and Ion Rifle Drones; Markerlights and bombs provide some added utility; Decoy Launchers are a must for 4++ against Interceptor

Razorshark Fighter – Arguably better at ground attack role than the bomber; Quad Ion Turret may have LOS issues in front arc; Decoy Launchers are a must

Hammerhead – Cheaper than before and still a durable weapons platform; more static than before with no Multi Tracker option

Broadside Team – Static, durable anti-air or anti-medium armor; can spam Missile Drones for 36″ S7 shooting up the wazoo; potential skyfire/interceptor; with their guns already being twin-linked, most buffs from an attached Commander are useless (with the exception of the Puretide chip for picking one of several handy dandy USRs, including Tank Hunter/Monster Hunter for re-rolls)

Skyray – Cheap chassis with Markerlights and Seeker Missiles; can skyfire by default with its standard equipment

As I tried to explain on Jaded Gamercast, with limited success due to the Grey Goose, I feel most armies will be built around a core of 1-3 Riptides for most of the heavy lifting (~200 each), 2-4 Fire Warrior Squads (~100 each), a couple of Pathfinder/Kroot infantry units for support (huge points range depending on unit size and upgrades). This can usually be filled out for around 1k points.

Once this core is filled out, you can season to taste with more support units and tank/aircraft hunters. HQ choices also offer a plethora of combinations, such as Commanders stocked with support and signature systems for a pile of special rules, or the cheaper Ethereal and Fireblade alternatives to buff your infantry gunline. Personally, I’d want to try a Commander with Iridium Armor and Drone Controller leading a unit of Marker Drones. This could provide the toughness and reliability Pathfinders sometimes lack due to being BS3. Give him a Target Lock and a ranged weapon and he can take potshots at separate targets (if needed) while the drones provide a steady stream of Markerlight hits.

With Stealth/Shrouded, she even blends into the white photo backdrop…

Shadowsun is also a really neat option, as she has Stealth, Shrouded and Infiltrate to give to any squad she joins. She also has some cool experimental drones (improved 3++ shield drones and one unit within 12″ can re-roll 1′s to hit). This allows her to combo-up with various units, giving them better deployment options, accuracy and survivability all in one neat little package.

As Broadsides are looking more and more like a S7 spam unit rather than the old S10 AP1 Land Raider killers, I fully expect to see a few Hammerheads with Railguns and/or various units with Fusion Blasters to pick up the slack. It might not always be advisable, but the Riptide can overcharge/nova reactor his Ion Accelerator for some S9 ordnance action, so he can definitely help if you’re truly desperate.

Overall, many units and combinations of units will remain viable in the new book. As we mentioned in the podcast, the humble XV8 may be one of the only units left in the dust, as these generalist support squads are now competing with Riptides and improved Stealth Suits for space in the force organization chart. If you are taking them, they need a specific role or they may just be wasted points. All those Deathrains from 4th and 5th will struggle to out-shine missile spamming Broadsides.

IMO, the Fusion Blaster is their best bet for finding a purpose, as that extra 6″ range boost they got makes them a lot more dangerous. With Broadsides’ Railguns no longer plowing through AV13/14 targets with ease, having a throwaway Fusion delivery mechanism might come in very handy indeed.

The other option for making XV8 work is obviously Commander Farsight with his up to 7 Bodyguards. Despite the horrendous points cost they can form a pretty nasty deathstar, deep striking with no scatter and attacking multiple targets at the same time via Target Locks. With a full complement of support/signature systems buffing the unit (hit and run, re-roll misses, ignore cover saves, etc.), they will be hitting very hard without reliance on Markerlights or other support units. Best of all, they don’t take up that precious Elites slot.

This week Lange is joined by Dan and Matt to talk about the new Tau Codex. How should you be building lists for this edition and how do the Tau stack up against other armies so far? Which units are a “must” for your army to compete? Listen and Enjoy!!

“Do you think that Forge World models are acceptable as replacements to fill in for the shortcomings of a codex?”

Come along and watch as Lange and Nathan struggle through Dead Space 3 on IMPOSSIBLE!!!! Mutants, fabulous coats, and Space Russians abound!

This week Lange and Nathan sit down to review the new Tau Codex for WarHammer 40K! Will the changes to the Tau core rules break the game or will the assault phase continue to destory the poor Tau Empire. Fuck Kroot? Pulse Bomb FAQ? Also, we talk about our least favorite newly released Tau model in Model of the Week! Listen and Enjoy!!

“Which Sim City did you feel was the best!?”

“Which game would you like to see Lange and Nathan play next?”