As alluded to in Episode 38, I have a LOT to talk about for a Stupidity Check from our lords and masters. As a result, this will be part 1 of the “Bukkake’d with Stupid” segment on this blog.

I was going to start on a different tangent but due to all of the “In your face!” directed to my co-host on the Facebook page, I thought I would start part 1 on this topic: Second Wave Releases.

The reason for the friendly ribbing on Facebook is entirely because of Lange’s Stupidity check on Episode 37. Lange stated that GWs failure was not releasing any additional models for Storm of Magic. GW (just to be dicks) decided to release models anyway.

The list of models GW is releasing can be found here but I will list them below in case they ever get moved from the Pre-Orders page:

Looking at the above list, I fucking agree with Lange. GW isn’t releasing any new models. Every fucking thing on that list is older than my kid. Half that list is from 2001 and the rest was 1997. What the fuck Games Workshop? 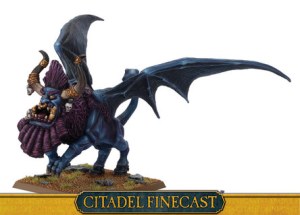 The greatest models ever made!

This is where Games Workshop fucks it up. As I said in Episode 37, GW had the chance to create beautiful new character models for armies which have received some major neglect. Instead they choose to take models which are so old, the vast majority of gamers weren’t in the hobby when they were released, and turn that shit into Finecast. Are you serious?

I could understand if GW wanted to make their (undoubtedly large) collection of metal casts for these ancient models available but Finecast!? Not to mention the fact that none of these models can be fielded in an army unless you are playing Storm of Magic. Do you seriously think that people are going to trip over themselves to shell out $45 for a monster they will field once (my prediction for the average number of games of Storm of Magic people will play before not caring)?
These releases only get more hilarious when you remember GW’s circle jerk announcement regarding Finecast with the comment of “…the highest quality miniatures the world has ever seen…”
Even more non-sensical is this line:
“Due to high demand, each Citadel Finecast product is limited to three (3) per customer.”
That is directly from the pre-order page on the Lammasu. Sorry everybody, GW is crushing your dreams. You can only have 3 Lammasu’s for your army.
Good Lord. Just writing this post makes me want to drive down to my local GW Hobby Centre and punch one of the employees in the dick.

3 thoughts on “Bukkake’d with Stupid: Games Workshop and Storm of Magic”